To attract the right talent, this plastic surgeon is recruiting in different places, evolving the traditional job interview and transforming his practice into a destination. 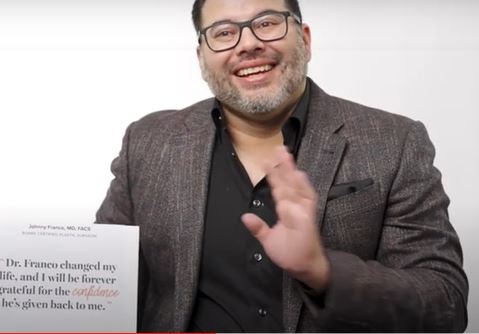 Dr. Johnny Franco, owner of Austin Plastic Surgeon in Texas, is expanding. With his surgical calendar booked for a full year, the practice is taking up an increasing portion of its 7,000-square-foot building in Austin and opening a second location in San Antonio—all at the same time.

That means that Franco’s payroll, which currently includes 15 employees, could grow to 40 or more in the next year. From sales staff to anesthetists to nurse injectors, Franco is hiring large numbers of people and the fit for each position must be right.

“Attitude is the number-one thing we look for,” he said. “It's got to be a good personality fit.”

To attract the right talent, Franco and his colleagues are doing things differently. They are recruiting in different places, evolving the traditional job interview and transforming their practice into a destination where talented people want to come and stay.

“We’re trying to make sure that everybody is in a system where they can be successful,” he said.

Franco and his colleagues do many of the standard hiring practices, such as putting ads on employment sites like Indeed. But they also consider recruiting an ongoing activity—including when there are no openings—and they look in places that many practices might ignore, such as social media.

Franco is active on several channels and sometimes gets direct messages from people looking for work. Last year, a woman reached out over Instagram to inquire about doing an externship and wound up staying on as a medical assistant. “We've loved her and then we just hired her,” Franco said.

Even when he doesn’t have openings, Franco always asks for a resume when people contact him. “We'll put it in a file and when a position comes open, we'll reach out to them,” he said. “When it's somebody who already follows us and understands our brand, they already have an attachment.”

In one case, Franco came across a nurse with the right skills and attitude and he created a position rather than lose her to another practice. “We may be slightly over-staffed for a little bit, but here's somebody who's a rock star and we're just not gonna let her go,” he said.

His best advice: be proactive. “When you run too lean, you struggle and you end up hiring just to stop the bleeding,” he said. “You get yourself into trouble.”

Rather than using 30- or 60-minute job interviews filled with canned questions, Franco invites candidates to spend a longer amount of time—sometimes a half day—in the office and to shadow existing employees, both in their department and in others.

How they respond can be revealing. Does the candidate roll up their sleeves and help? Do they ask relevant questions and maintain conversation? “Sometimes people can be very good during an interview, but through the course of a day you get a much better idea,” he said. “Sometimes there will be a situation that happens throughout the day, and then we will ask them, ‘how would you handle the situation?’ It's nice to get their feedback.”

The goal behind all of these strategies is to get a more thorough look at candidates, and to give them a deeper insight into your practice, including its culture. “Be honest with them,” Franco said. “The good, bad and ugly of everything. No job is perfect. It doesn't do them a service, and it doesn't do us a service, if they come here and two weeks later, they leave.”

Franco’s practice has also taken great care to establish benefits designed to attract and keep the type of personnel they want.

That includes a 401(k) plan with a 3% contribution, regardless of whether employees contribute; profit sharing that yields a year-end bonus; and solid health insurance. Some positions also have incentive programs that allow employees to make more money as they hit certain goals.

For example, an employee starts with a base salary and can increase what they make by selling products, booking consults or excelling in other activities. Franco said many employees enjoy making progress toward a goal. Between compensation, benefits and bonuses, the practice is becoming a destination employer.

As Franco put it, “We try to make this a system where… they feel like they're well taken care of.”